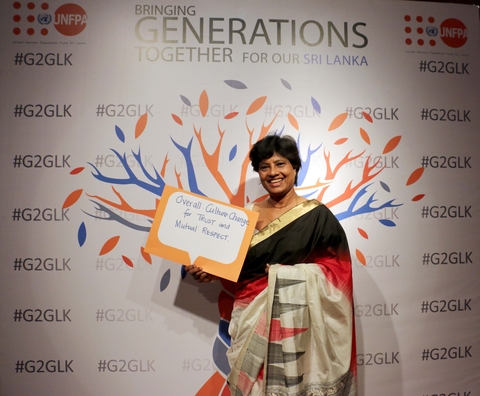 The United Nations Population Fund facilitated the second generation to generation (#G2GLK) dialogue on identifying the impediments holding women back, and the kind of investments needed to allow Sri Lankan women to fulfil their potential as dynamic leaders.

By using and analyzing data from Sri Lanka’s 2012 census and, through recommendations from a series of intergenerational policy dialogues, UNFPA hopes to build a body of evidence that documents shifting population dimensions, and identifies needs, that policymakers need to fulfill. Population data is used as a basis for the generation to generation dialogues, and is taken from UNFPA’s publication“20.4 Million: Sri Lanka’s Population at a Glance”, which provides a comprehensive but simple overview of Sri Lanka’s population.

The second inter-generational dialogue, held on March 29, 2016 was on “Investing in women as game changers for Sri Lanka’s future development: what does it take for women to fulfill their potential as leaders?”

UNFPA worked with the Department of Census and Statistics to develop a thematic report on “Gender and Development in Sri Lanka: Implications for Policy and Action”.

There were three policy points identified as integral to unleashing women’s leadership potential, through evidence based data, and are elaborated on further in the pre-brief handed out at the event. These three key points are:

1) Investing in Potential Women Leaders for the Job Market

2) Investing in the Security of Women in the Labour Force

Addressing the event, UNFPA Country Representative, Chair of the National Forum against Gender-based violence, and Chair of the UN Gender Theme Group, Mr. Alain Sibenaler,  emphasized the importance and purpose of the  dialogue “In a country that has 650,000 more women – mainly healthy and well educated than men – most women do not fulfill the potential that could make Sri Lanka a fast-changing, emerging and competitive role model as a middle income country with equal AND equitable opportunities for its entire population.

At the ensuing discussion the following observations and policy points were raised:

One of the key factors that affect the leadership potential of Sri Lankan women in the labour force were identified as gender stereotyping of education options – as women are encouraged to pursue degrees in arts, paramedical studies and indigenous medicine, while more men enroll in streams such as engineering, architecture and ICT where there are more jobs available.

The lack of flexi-work conditions, minimal childcare options, and male bias in the private sector are the also leading factors.

Speaking as a panelist, Hon. Minister Harin Fernando mentioned: “We have developed a culture of gender inequality. In society people feel they can perform acts of violence and get away with it. We need to change that attitude. To change the attitude in gender-based violence, education, culture – the rule of law has a role to play”

In the discussion on investing in the Security of Women in the Labour Force the following observations were discussed:

Street harassment and sexual harassment in the workplace, non-discriminatory payment structures, and promotions should become key areas of policy intervention to increase female labour force participation. It is not only about opening doors for women to enter the labour force; once in a work environment women face harassment from the male colleagues.

Representing the private sector Ms. Preena stated that “most institutions don’t acknowledge sexual harassment nor do they have policies in place to combat it”.

This in turn discourages women from entering the workforce.

One of the most marginalized and vulnerable groups are the female headed households (FHH) and their numbers are great. 1.3 million Households in Sri Lanka are FHH.

Among the total FHH 34.6% are widows, while 53.3% are married and 7.4% are listed as never married. Understanding this high number a lively discussion ensued on tapping into the potential of female headed households to contribute to the economy. The large number of female headed households highlights the need for legislative reforms to address discriminatory laws and practices in land inheritance that both disadvantage women and hinder economic productivity.

Taking into consideration all these voices, UNFPA is developing a post-dialogue brief on the solutions and next steps raised at the dialogue to share with policy makers and other stakeholders.

The first generation to generation dialogue held in December 2015 focused on: ‘Youth as a driving force in maintaining Sri Lanka’s middle income status’ . Some of the key recommendations from the dialogue were:

1) Recognize “Youth” as an economic and social opportunity in all policies.

4) Mainstream knowledge on healthcare and aging services in order to accommodate for a rapidly aging population in the future.

A comprehensive analysis of that dialogue along with policy recommendations can be found in G2G Voices 1.

At UNFPA, we are committed to supporting Sri Lanka by utilizing elaborate evidence-based data, and translating this into policy implications. By generating policy fora and discussions and facilitating generation to generation dialogues, we can together identify how, where and with whom investments should be made to harness the potential of the Sri Lankan population and enter the next stage of Sri Lanka’s development.