Report on Human Rights Commission comment on the death penalty 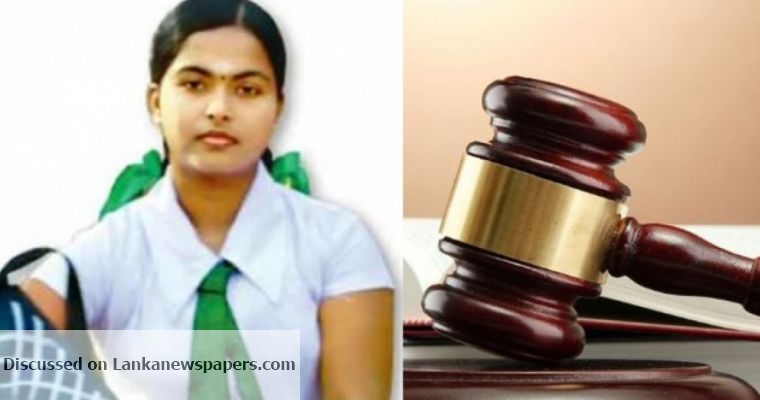 Report on Human Rights Commission comment on the death penalty

Sri Lanka’s longstanding commitment to the UN as well as the EU not to implement the death penalty will save those who had been sentenced to death on Wednesday for gang rape and murder of 18-year-old student Vidya.

The Trial-at bar, which heard the Vidya murder case in Jaffna sentenced seven of the accused to death .

Two other accused who turned state witnesses were exonerated of all charges.

Justice Ministry Secretary Padmasiri Jayamanne yesterday told The Island that Sri Lanka hadn’t carried out judicial executions since 1976 and was unlikely to resume the practice now. Jayamanne pointed out that international studies had proved that judicial executions didn’t result in sharp drop in serious crimes as envisaged.

Asked whether the EU and Sri Lanka had signed an agreement or reached an understanding regarding non-implementation of Capital Punishment? And would EU object to GoSL implementing death penalty in selected cases such as Vidya murder (verdicts in respect of females and children), a spokesperson for the EU mission in Colombo told The Island: “The EU and Sri Lanka hadn’t finalized such an agreement. The EU holds a strong principled position against the death penalty in all circumstances and all cases with no exceptions. The universal abolition of the death penalty is one of the key priorities of the EU’s human rights external policy.”

President’s Counsel Saliya Peiris, spokesperson for the Human Rights Commission of Sri Lanka told The Island yesterday that there was no change in their stand in respect of death penalty. HRCSL member Ambika Satkunanathan and Peiris pointed out that in early January 2016, the HRCSL explained its position to President Maithripala Sirisena in a letter titled ‘Recommendation to abolish death penalty in Sri Lanka.’

The HRCSL, explained why death penalty should be abolished in Sri Lanka in accordance with her international obligations and required measures to do away with it. The HRCSL pointed out that Sri Lanka couldn’t under any circumstances impose death penalty on innocent persons while underscoring existing shortcomings in the legal system.

However, State Minister Sudarshini Fernandopulle emphasized that she always strongly believed in the death penalty.

When The Island raised the issue with President Maithripala Sirisena,at a special meeting with heads of media, the President said that he was ready to implement death penalty after considering the views of parliament.

However, the then Foreign Minister Mangala Samaraweera pointed out Sri Lanka’s commitments to the UN as well as EU not to implement death penalty