comes to a close families of the disappeared still linger in hope that their loved ones would return. Some have been missing for decades and yet their loved ones express hope of their return. In the Budget 2018 speech Finance Minister Mangala Samaraweera said that the Office of Missing Persons(OMP) will commence operations from 2018. However the debates on the Enforced Disappearance Bill have been postponed twice. Against this backdrop civil societies have shown concern over the delay in passing the Enforced Disappearances bill and setting up of the OMP.

The UN rapporteur on Transitional Justice Pablo de Greiff, who visited the country recently, said that there were victims in every community who have rights to truth, justice, reparations and guarantees of non-recurrence. Amnesty International (AI) has estimated that since the 1980s there have been at least 60,000 and as many as 100,000 cases of enforced disappearances in Sri Lanka. The victims include Sinhalese young men suspected of having connections with the JVP in 1989 and 1990 and Tamils suspected of links with the LTTE during the war. The victims also include human rights defenders, aid workers, journalists and critics of the Government. 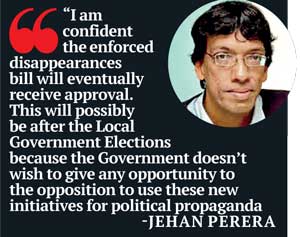 Attorney-at-Law and senior researcher at the Centre for Policy Alternatives (CPA), Bhavani Fonseka, said that though successive Governments have identified enforced disappearances as a problem, the responses from the Governments, including the current regime, have been disappointing. “The Government committed to an office of missing persons and to criminalize enforced disappearances. As for the OMP, despite the commitment to establish it in 2015, to date it has not still been operationalized. Minister Samaraweera said during his budget speech that it will be operationalized in January, 2018. CPA is extremely concerned about these delays,” she said. Meanwhile the Constitutional Council has reportedly selected seven members to the OMP and the names have been submitted to the President for approval.

Sri Lanka is a signatory to the International Convention for the Protection of All Persons from Enforced Disappearance since December 10, 2015.“This was also committed in 2015. The Government ratified the convention in 2016 and made a draft enabling legislation with the Government in attempts made to have a debate on it. But the debates were postponed,” said Fonseka.

National Peace Council Executive Director Dr. Jehan Perera ‎ admitted that though the Government was proceeding slowly it was on the correct path. “I am confident the enforced disappearances bill will eventually receive approval. This will possibly be after the Local Government Elections because the Government doesn’t wish to give any opportunity to the opposition to use these new initiatives for political propaganda,” said Perera.

“The Opposition claims that these efforts are aimed at targeting the military, the war heroes, and the security forces. It is meant to ensure that our security forces operate within the law, and don’t violate people’s human rights,” he explained.

Asked if the disappearances that took place during the JVP insurrection were included in these new initiatives he said that there was no time bar on the OMP. 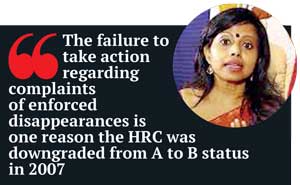 Fonseka expressed similar sentiments that though successive Governments have appointed commissions there hasn’t been action taken afterwards. “We’ve seen the all island commission on enforced disappearances headed by Manouri Muttetuwagama in the 90s. Then we had the Udalagama Commission, the LLRC Commission and several others. One of the recommendations of the LLRC which was made public in 2011 was that this issue of enforced disappearances is so significant, that it needs special attention and as a result the previous Government established the Paranagama Commission. So successive Governments have come up with very specific measures, mostly commissions of inquiries. But it has stopped there,”she added. 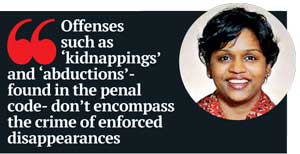 The President has met with families of the disappeared and promised that the Government would probe the issue of enforced disappearances. “But again it seems to be more the rhetoric, than real action,” noted Fonseka.

Make such acts a crime

“Parents’ deaths were accelerated by their grief,”

In 1989 a factory worker in the free trade zone, Ranjith Herath was summoned for a labour inquiry. He was accompanied by M.Lionel. However they never returned home. The following day their bodies were found burning at the Raddoluwa junction in Seeduwa where now a monument has been built to commemorate the disappeared. Herath’s fiancée at the time Jayanthi Dandeniya, now a political activist, spoke to the Daily Mirror about how the damage inflicted by the JVP insurrection and the extra-judicial killings have now become merely a thing of the past which is considered as a fascinating story.    “The parents of the children who disappeared during the 1988/89 period are very old now. Some have died. The truth is that the death of these parents was accelerated by their grief,” she said.

He son would have been murdered, but the body would have not been handed over to the mother. Instead the perpetrators would take it with them

She further said that some parents had suffered from mental illnesses as a result of the grief.  Dandeniya said that some of the young wives remarried, but most of them didn’t. Nevertheless they have endured difficulties and educated their children well. “The mothers tried to hide from their children the fact that their fathers had been killed when they were small. Some children were lied to that their fathers were abroad,” she said.

Referring to events at that time, Dandeniya said that people would be killed and there would be a piece of paper lying close to the dead bodies stating that the bodies shouldn’t be removed. “People’s ears were cut. NICs were collected. People were asked to switch off lights,”she reminisced.

“There is no punishment for the perpetrators. No one investigates. There are no court cases,” she claimed. “The son would have been murdered, but the body would have not been handed over to the mother. Instead the perpetrators would take it with them. How can this be a ‘disappearance’? The mother saw the child being killed,” said Dandeniya who hails from Beliaththa where the JVP was very powerful. Two of her brothers were also victims to these killings.

The parents of the children who disappeared during the 1988/89 period are very old now. Some have died. The truth is that the death of these parents was accelerated by their grief

An MOU with the OMP
As the Office of Missing Persons will be a specialized body dedicated to investigate enforced disappearances the HRC hopes to enter into a memorandum of understanding(MOU) with the OMP instead of replicating the work of the OMP. “ We are pleased that the recent budget has allocated a substantial sum to begin its operations,” said Satkunanathan.
Recommendations
The HRC has written to President Maithripala Sirisena urging him to ensure the Bill on the Protection of All Persons from Enforced Disappearances is enacted and has recommended changes to the current Bill to strengthen it and bring it in line with the International Convention on the Protection of All Persons from Enforced Disappearance.   Apart from the Bill being passed and the OMP being set up Dr.Perera recommended that there should be a campaign to spread awareness to inform people about the purpose of these
In a Supreme Court FR case on enforced disappearances, decided this year, the Supreme Court found the State to be responsible for the disappearance of two individuals and ordered the State to pay Rs 1 million each to their parents as compensation
initiatives and that they are not about threatening national security. “This is about protecting human security and human security is what national security is all about. We have security forces because we want to protect the people of this country.
These laws are meant to protect the people of the country. That message has to be taken to the people at large, so that they aren’t deceived by false propaganda,”said Dr. Perera.
Enforced Disappearances defined

According to Article 2 of the International Convention for the Protection of All Persons from Enforced Disappearance an “enforced disappearance” is the arrest, detention, abduction or any other form of deprivation of liberty by agents of the State or by persons or groups of persons acting with the authorization, support or acquiescence of the State, followed by a refusal to acknowledge the deprivation of liberty or by concealment of the fate or whereabouts of the disappeared person, which place such a person outside the protection of the law.

As Dr.Jehan Perera pointed out “missing persons” could also include persons who have gone missing due to reasons not involving the State as well. 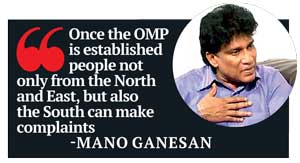 Speaking to the Daily Mirror Minister of national Co-Existence Dialogue and Official Languages Mano Ganesan said that the OMP will be operationalized in the weeks to come. “The effort to operationalize the OMP is a very progressive move. Due to the efforts of people like us within the Government, the civil society and the international community, the OMP is slowly, but steadily taking shaped,” he said.

“The President has to formally approve the names of the OMP commissioners decided on by the Constitutional Council,” he added.

Asked whether the enforced disappearance bill will be taken up for debate soon, he said that that the focus now was on the OMP.  “The Bill which was to be submitted to the Parliament was postponed. Since the OMP Act has already been passed, we thought that we would start with the OMP, and proceed with the Bill afterwards,” he said.

“Once the OMP is established people not only from the North and East, but also the South can make complaints,” he said throwing light on the positives of the OMP. “This will not be a static office. There will be regional offices, mobile offices which can go to villages and approach the people,” he added.